Urlacher Still Out With Hamstring Injury 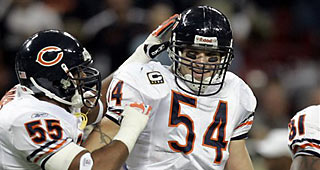 Brian Urlacher was inactive for the Chicago Bears' regular season finale against the Lions.

Urlacher has been out since suffering a Grade 2 hamstring on Dec. 2.

Nick Roach will remain at middle linebacker for Chicago. 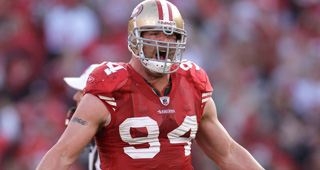 Justin Smith has a partially torn triceps, according to a report from the Sacramento Bee.

Without Smith for the majority of the past six quarters, San Francisco has allowed 66 points and 753 yards to opposing offenses.

The 49ers have listed Smith's injury as related to his elbow. 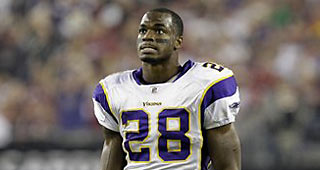 Adrian Peterson did not practice on Thursday, but he is expected to play as usual in Week 17.

Peterson has recently been bothered by abdominal soreness.

Peterson left Week 16's win early due to the injury. 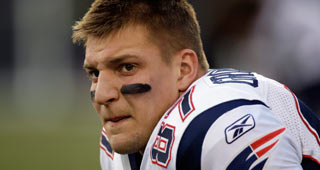 Rob Gronkowski continues to be listed as day-to-day after suffering a broken forearm in Week 11.

Gronkowski has been listed as questionable for each of the past 23 games. 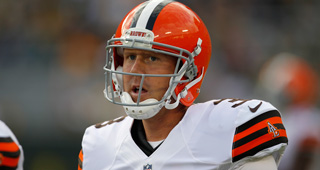 The Cleveland Browns may start third-string quarterback Thad Lewis in their Week 17 finale with both Brandon Weeden and Colt McCoy out with shoulder injuries.

The Browns faced an eerily similar scenario in 2008 when Bruce Gradkowski started after Brady Quinn, Derek Anderson and Ken Dorsey were all on injured reserve. 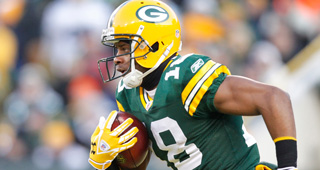 The Green Bay Packers will leave Randall Cobb as the team's kick and punt returner in spite of an ankle injury.

Cobb was injured when tackled returning a punt on Sunday.

Cobb leads the Packers in receiving.

"I'll be honest with you: I don't have a really high tolerance for this (line of questioning) because I don't understand how you play scared in the game of football. I don't get that," Mike McCarthy said. "I think it's convenient questioning. I understand the risk involved in every single play. Some plays are higher risk than others, and I'm fully aware of that.

"But you can't sit here and say special teams is important if you don't put a guy like Randall Cobb out there as a returner. Now, if we're sitting here next year, we might be having a different conversation. But the way our team is built for 2012, Randall Cobb is a huge part of our success on special teams." 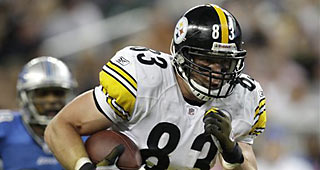 Heath Miller tore the ACL in his right knee in Sunday's loss to the Bengals.

"Unfortunately his season comes to an end," Mike Tomlin said. "He has been rock solid for us and we really appreciate his efforts. We understand injuries are a part of the game, but unfortunately it brings his season to a close."

Miller finished the season with 71 catches for career highs of 816 yards and eight touchdowns. 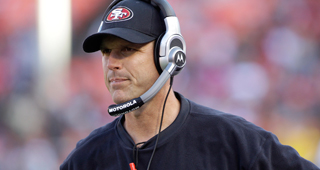 Mario Manningham tore his ACL and PCL in his left knee during the San Francisco 49ers' loss on Sunday to the Seahawks. 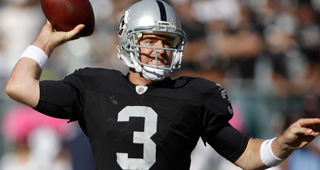 Carson Palmer will miss Week 17 due to cracked ribs and a bruised lung.

Palmer left Sunday’s 17-6 loss at Carolina in the first quarter after he was hit hard by defensive end Greg Hardy.

A CT scan revealed the injuries, but he was deemed OK to make the long flight home.

Matt Leinart is expected to start at quarterback over Terrelle Pryor. 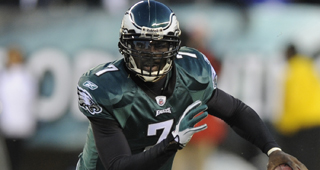 Nick Foles will not play in Week 17 for the Philadelphia Eagles due to a broken hand.

Michael Vick could start at quarterback against the Giants in what is expected to be his final game with the franchise.

"Nick will obviously not play," Reid said. "This was something that showed up on the MRI this morning; it wasn't present on the X-ray.

Rob Gronkowski is recovering from a broken forearm.

DeMarcus Ware is wearing a brace to protect a hyperextended elbow.

Griffin Expected To Play Against Eagles

Robert Griffin III is expected to start for the Redskins in Week 16 against the Eagles.

Cousins To Start At QB For Redskins

Robert Griffin III will not start for the Redskins and instead will go with Kirk Cousins.

Clay Matthews To Return For First Time In Four Weeks

Clay Matthews has had a recurring hamstring injury.

Gronkowski Returns To Practice For First Time Since Injury

Rob Gronkowski returned to practice Friday for the first time since breaking his left forearm.

Rex Ryan backtracked from comments on Thursday about the availability of Tim Tebow for Monday's game.

Britt Still Not Fully Back From Knee Surgeries

Griffin Encouraged By Progress On Knee

Robert Griffin III is optimistic he will play on Sunday against the Browns.

Jay Cutler has a neck and knee injury.

Robert Griffin III had a slight limp as he walked on Wednesday.

The Bears have placed Robbie Gould on injured reserve due to a calf injury.

Pierre Garcon said that Kirk Cousins will start on Sunday for the Redskins with Robert Griffin injured.

Aqib Talib injured his hip during the second quarter of the Patriots' win on Monday.

The Cowboys are hoping Dez Bryant can wait to have surgery until after the season is over.

Bowe To IR With Broken Ribs, Likely Done With Chiefs

Dwayne Bowe will be a free agent in 2013 and is unlikely to return to the Chiefs.

Hakeem Nicks had four catches for 67 yards and a touchdown.

Robert Griffin's availability for next week is unclear, but an X-ray and MRI revealed no major damage to the knee, including major ligaments.