Michael Thomas is seeking a new deal with the New Orleans Saints that would make him the highest-paid wide receiver in NFL history.

Thomas is seeking $22 million annually. No receiver has an average salary of $20 million.

Odell Beckham, who has a contract worth $18 million per season, is currently the NFL's highest-paid receiver.

The Saints want to reward Thomas with a new deal, but aren't ready to meet his asking price.

Share Tweet Discuss Feedback
OBJ: I Was Stuck At Place With Giants That Wasn't Working For Me 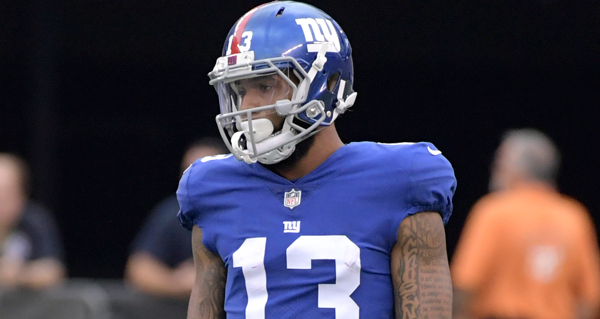 Odell Beckham Jr. said he believes leaving the New York Giants was necessary for his career.

"I can’t wait to get going," said Beckham. "I just felt with the Giants I was just stuck at a place that wasn’t working for me anymore. I felt like I wasn’t going to be able to reach my full potential there; mentally, physically, spiritually, everything I felt capable of doing, I just couldn’t see it happening there. So I think allowing me to be in an environment where I can be myself and give it a different approach, I feel like my football will benefit. I’m just excited about being able to play football again and not have to deal with all the other stuff and politics that came with my previous role."

Beckham was asked about playing with former LSU teammate Jarvis Landry with the Browns.

"I’m very excited by the culture at the Browns. It’s been building over the years, and they’ve got players over there who I just know I’m gonna click with. Jarvis is a brother of mine, and we dreamed of this moment. It’s just crazy that it’s actually happening. The percentage of people that make it to the NFL is less than 1%, so the chances of me playing with one of my brothers on the same team is a dream manifested, for sure."

The two sides expect the extension to be completed before the start of training camp.

The Saints are comfortable making Thomas the highest paid wide receiver in the NFL.

The Atlanta Falcons are confident they will agree to a long-term extension with Julio Jones before the start of training camp.

Jones has two seasons remaining on his current contract with the Falcons.

Mickey Loomis says the New Orleans Saints have had "some conversations" about a new contract for Michael Thomas.

It was expected that Thomas would be next in line for a new deal after Cameron Jordan received an extension last week.

"We've had some conversations, and I like keeping that close to the vest until there's something to report, but look, we love what Mike's done for us," Loomis said. "He's a fantastic player, one of the best at his position in the league, and hopefully we can keep him a Saint for a long time as well."

Thomas is entering the final year of his rookie deal, which is set to pay him $1.148 million. He has produced at least 90 receptions and 1,000-plus yards in each of his three professional seasons.

The Green Bay Packers have claimed Michael Roberts off waivers.

Last week, a trade sending the tight end from the Detroit Lions to the New England Patriots for a 2020 conditional seventh-round pick fell through after he failed his physical.

He was sent back to Detroit's roster and then waived.

The agent for Dak Prescott, Todd France, has reportedly asked the Dallas Cowboys for a massive contract extension.

France has "broached" a deal in the range of $34 million annually, according to a report.

Prescott is scheduled to make $2.025 million in 2019 under his fourth-round rookie deal. A deal with a $34 million annual average would mean a new five-year, $138 million contract for the quarterback.

The Indianapolis Colts have agreed to a four-year contract extension with Kenny Moore.

Moore will be the NFL's highest paid slot cornerback.

Moore had a year remaining on his deal before moving to a restricted free agency tag.

Michael Thomas is heading into the final year of his rookie contract with the New Orleans Saints.

Thomas isn't stressing about his status and has said he's "pretty certain" things will be handled well by Mickey Loomis and the organization.

The Saints awarded Cameron Jordan with an extension earlier this week and Sean Payton believes Thomas will be next.

"He's been very consistent and he'll be the next one I am sure," Payton said. "Mickey will be working. I know that they probably have already begun discussions. I leave that to those guys to handle. He competes, he is durable, and he is someone that enjoys playing."

Melvin Gordon is in the final year of his rookie contract and said his representation has had preliminary talks with the Los Angeles Chargers.

"I'd be lying if I said I didn't want a deal done," Gordon said. "But that's not going to stop me from coming out here and doing what I need to do. We're going to see. I would like to go out there and have it done. We're talking right now, and that's kind of where I'm going to leave it."

While he is hopeful that a contract extension will be completed, Gordon did not dismiss the possibility of not playing in 2019 if no deal is consummated by the start of the regular season.

"I don't know, man," Gordon said. "I'm just trying not to talk about it. If it's going to happen, it'll happen. When it does, I'm pretty sure you guys will know."

Jalen Ramsey is entering the final year of his rookie contract.

Cameron Jordan now has five years and a max value of $74 million left on the deal.

The Texans don't currently have a general manager.

Kyle Rudolph could remain with the Vikings through the 2023 season.

The extension would take Joe Staley, 34, through the 2021 season.

Adam Humphries signed a four-year deal with the Titans.

Acquired by the Rams during last season, Dante Fowler is working to prove to the team that he's worth a long-term deal.

Gerald McCoy and the Buccaneers parted ways this offseason.

C.J. Anderson has signed with four teams since the Broncos cut him in April of 2018.