Justin Tucker has signed a four-year, $20.45 million contract extension with the Baltimore Ravens. The deal is the richest ever for a kicker.

The deal includes $12.5 million in fully guaranteed money for Tucker.

Tucker was scheduled to become a free agent after the 2019 season.

Tucker has converted an NFL record 90.1 percent of his field goal attempts.

Tucker joined the Ravens as an undrafted free agent out of Texas.

Ben Roethlisberger and the Pittsburgh Steelers have agreed to a contract extension through the 2021 season.

The deal will essentially guarantee Roethlisberger retires with the NFL.

Pittsburgh has lost both Antonio Brown and Le'Veon Bell this offseason amid questions of Roethlisberger's leadership.

The Dallas Cowboys have exercised their fifth-year option on Ezekiel Elliott.

Whether or not a long-term deal is reached remains to be seen.

Elliott led the league in rushing as a rookie and again last year.

Chris Harris, Jr. has told the Denver Broncos that he wants a new contract.

If the team doesn't give him a new deal, the cornerback wants to be traded, according to sources.

Harris is entering the final year of his contract.

He has not attended the team's voluntary offseason program, including the team's first minicamp last week. 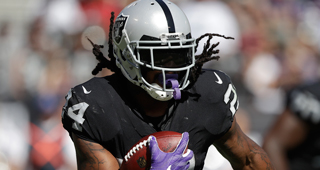 Marshawn Lynch is planning on retiring from the NFL again.

Lynch first retired in February of 2016, Tweeting the announcement during the Super Bowl.

Lynch applied for reinstatement in 2017 and was traded by the Seattle Seahawks to his hometown Oakland Raiders.

The Raiders plan to spend an early draft pick on a running back.

The Pittsburgh Steelers and Ben Roethlisberger are negotiating a contract extension in hopes of getting a deal done before the start of Thursday's draft.

The two sides have been holding talks since the end of the season and have made progress of late.

Roethlisberger is now 37 and is entering the final season of his current contract.

Gordon is uncertain to play in 2019, but he will play with the Patriots when he does return.

Gordon was traded by the Cleveland Browns to the Patriots in September of last season.

Gordon announced on Dec. 20th that he was stepping away from football due to mental health issues. Gordon is facing an indefinite ban for violating terms of his reinstatement.

The Falcons placed the non-exclusive franchise tag on Jarrett in March, just a few days before the 2015 fifth-round pick would have hit free agency.

Joey Bosa was the third overall pick three years ago.

Matt Ioannidis recorded a career-high 7.5 sacks last season and now has 12 for his career.

Demaryius Thomas spent the end of last season with the Texans.

Jadeveon Clowney won't be involved when the team starts its offseason program on Monday.

Nate Sudfeld has signed his second-round restricted free agent tender and will participate in the start of offseason programs with the Eagles.

Russell Wilson could play year-to-year under the franchise tag or potentially be traded by the Seahawks.

Seahawks Believe Russell Wilson Would Like To Play Elsewhere

Russell Wilson could drive a harder bargain on his contract with the Seahawks than he would another team.

Chris Hogan had 35 catches for 532 yards and three touchdowns last season for the Patriots.

Ty Montgomery will be Le'Veon Bell's backup at running back.

The guard is now signed through the 2020 season.

Ty Montgomery is visiting with the Jets on Thursday and Dolphins on Friday, according to a source.

Austin Seferian-Jenkins has 116 career receptions for 1,160 yards and 11 touchdowns in 43 games over five seasons.

The 49ers have placed the franchise tag on Robbie Gould and also remains a free agent.