The preliminary line for the November 9 showdown between the country's top-ranked teams has Alabama as more than a touchdown favorite against LSU.

The AP Poll has LSU and Alabama listed at No. 1 and 2, respectively, but in the latest CFP odds from SportsBetting.ag, LSU has the fourth-best odds to take home the national championship behind Alabama, Clemson and Ohio State.

On October 10, the Tigers were +9.5 on a neutral field against Alabama in a potential CFP matchup so they have certainly climbed in the oddsmakers' power ratings the last few weeks. However, the unknown status of Tua Tagovailoa has the book being cautious with the spread.

"We kind of middled the line not knowing if Tua is going to be out there or not," said Adam Burns, oddsmaker at SportsBetting.ag. "If he plays, the spread will get to or around -10. If he doesn't, look for it to settle around -7. He's worth 3-4 points to the number." 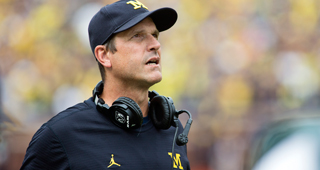 Jim Harbaugh is refuting reports he has interest in leaving Michigan to return to the NFL.

Harbaugh sent letters to parents of current players and commitments that addresses a potential departure.

Harbaugh writes in the letter that recent reports of him pursuing an exit strategy are "total crap," and that it is "an annual strategy driven by Michigan's enemies to cause disruption to our program and to negatively recruit."

A source close to Michigan said Harbaugh was angry about the reports and that they were "fabricated to hurt in recruiting."

Michigan is 5-2 this season and still has Notre Dame, Michigan State and Ohio State on the schedule.

Tua Tagovailoa will miss Alabama's game next week against Arkansas after undergoing surgery to help repair a high-ankle sprain.

"Our physicians performed a successful tight-rope procedure on his right ankle this morning," Alabama coach Nick Saban said in a statement. "This is the same injury, but the opposite ankle that Tua injured last season. Tua will miss next week's game against Arkansas, but we expect a full and speedy recovery."

Tagovailoa had the "tightrope" procedure on his other ankle following the SEC Championship Game last season and returned in time to compete in the College Football Playoff.