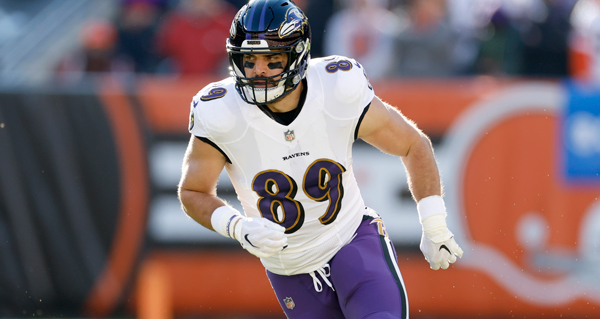 The top two fantasy tight ends of 2021 return to the same respective spots in the 2022 rankings, with Mark Andrews getting the nod over Travis Kelce. Understood if you prefer Kelce, but Andrews’ age during the 2022 season (27) places him in his prime, while Kelce’s age (33) puts him on a likely decline. Defenses also figure to focus heightened attention on Kelce with the Chiefs’ trade of Tyreek Hill to the Dolphins.

Both Andrews and Kelce should be drafted in round 2.

Tier 2 boasts four elite tight end options, as the position has a nice collection of high end talent. Kyle Pitts caught 68 balls for over 1,000 yards in his rookie season, putting him in very rarified air. Only one of those receptions was a TD, however, which kept him just outside of the top 5 scoring TEs. While there’s a dropoff at QB from Matt Ryan to Marcus Mariota, look for positive regression on the TD front this year.

George Kittle has consistently been a monster when on the field, with over 1,000 receiving yards in 2018 and 2019, and on pace for the same over the last two seasons on a per game basis. Kittle has missed 11 games over the past two seasons, so you are buying some injury risk with him. The arrival of Trey Lance should open up his downfield game, making him a safe bet for another 1k in receiving yards…provided that he stays healthy.

Injuries ruined Darren Waller’s 2021 season after he was on pace for this third straight 1,000 yard season. With Davante Adams now in the fold, Waller should find less attention devoted his way by defenses, opening things up for another huge Waller season, health permitting.

Dallas Goedert took off last season once Zach Ertz was traded. Look at these per game averages:

TDs were slightly more frequent with Ertz on the team (2 TDs during each period, but less games w/ Ertz). But TDs in a season tend to fluky as opposed to providing any forecast of future performance. So your focus should be on the improved numbers post-Ertz, which propel Goedert into tier 2.

The tier 2 group should come off draft boards starting in the back half of round 3, and continuing through rounds 4 and 5.

As we move into tier 3, we venture into safe starting options with lower upside than the tiers above. TJ Hockenson established a strong connection with QB Jared Goff, finished with 583 yards and 4 TDs over 61 receptions in just 12 games. Goff targeted Hock a healthy 7 times per game. There could be a slight drop in targets with WRs DJ Chark and (eventually) Jameson Williams coming on board, but he’s a safe mid-level TE1.

Dalton Schultz had a career year in 2021, with more than 800 yards over 78 catches, with 8 of those receptions finding the end zone. While Schultz will have less players demanding targets with Amari Cooper gone, you should be prepared for TD regression here.

Lastly, Zach Ertz experienced a renaissance after his midseason trade to Arizona, with 56 catches for 574 yards over 11 games, with 3 TDs on his new team. The arrival of Marquise Brown could hurt Ertz’s targets, but don’t expect a major downturn. Ertz fits well with Kyler Murray and the Cards’ offense, and he’s a good bet for 60 catches and 600 yards.

You should target this group in the middle part of your drafts, anywhere from rounds 7 through 9.

Tier 4 houses the low end TE1 / high end TE2 class, with Buffalo Bills’ TE Dawson Knox leading the way. Knox developed a strong connection with QB Josh Allen last season, catching 49 balls while being targeted 71 times. His 9 TDs won’t likely to be repeated this season, but 5 to 6 TDs should be within reach.

Young tight ends Pat Freiermuth and Irv Smith may have the highest upside in tier 4. Freiermuth caught 60 balls in his rookie season, and figures to be heavily targeted regardless of the QB the Steelers choose to start. Irv Smith has a sweet role waiting for him in the Vikings’ improving offense…but he has to make it to the opening week healthy. Smith missed all of the 2021 season with a knee injury, and now appears to have an injured thumb. So his spot in the rankings is tentative at the time of this writing, but he’s a huge upside play his year.

Hunter Henry buoyed his fantasy owners in 2021 as he found the end zone for 9 TDs. Scoring TDs on 18% of receptions is not sustainable, however, so expect some regression.

Each of the tier 4 TEs are low end starters in deep leagues / high end backups in shallow leagues. Don’t reach for any of these options earlier than round 10.

For tier 5, we’re looking strictly at deep league starters and matchup plays, as none of these players should be anything more than a spot start for you unless you're in a league with 14+ teams. Won’t dive too far into these guys, but the upside plays here are Tyler Higbee, Cole Kmet, David Njoku (for the few games with Deshaun Watson at QB) and Evan Engram.

The tier 5 group should be late round picks or undrafted free agent pickups.

The tight end position has improved both at the top and through its depth. That said, having an elite tight end gives you a key advantage for which more than offsets the drop off you’ll have at WR or RB as a result of drafting the tight end high, given the incredible depth at WR and the lack of sure things at RB this year. You should feel free to address the position in round 2 if you want the cream of the crop (Andrews and Kelce), or a few rounds later for the next level of elite players (Pitts, Kittle, Waller and Goedert). So the strategy here…if you can land one of the top 6 TEs in the right round, go ahead and lock it in.

If you miss on the first two tiers, make an effort to snag one from tier 3, as that’ll give you a solid player at the position. And if you miss on tier 3, then tier 4 it is! In a nutshell, you want to draft the best tight end that you can without reaching too early, but no TE past tier 4 as your weekly starter.