Kicking And Screaming, The Giants Are Starting Fresh 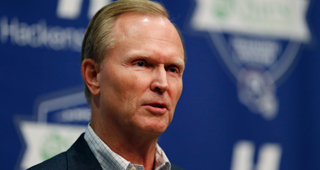 The New York Giants have been punchdrunk, couchbound, comatose since the last stage of the 2017 season, when slumping toward a 3-and-13 record and with the squad’s defensive players in open revolt against their overmatched head coach, a decision was made to bench Eli Manning for the first time since he’d assumed the starting job in 2004. This passed through the fanbase like a kidney stone and roused the truculent barroom justices of the New York/New Jersey media scene—lots of men with faux-Floridian tans breathing heavily into their radio mics, announcing the degree to which you just cannot do that—and led directly to the hasty-huffy firing of said overmatched head coach and also a two-time Super Bowl-winning GM who, sure, hadn’t been maneuvering sharply over the past few years but didn’t deserve to get hucked into the street before season’s end. The Giants had committed a grave moral crime against their erratic but weirdly clutch franchise quarterback and, like a daffy broad in a Hitchcock film, emerged from their trauma pathologically incapable of making a choice.

In the summer of 2018, after what you could hardly call a candidate search, they hired Dave Gettleman to be their new GM. (In part because he promised them he would keep Eli, who was cooked, installed as the starter.) Gettleman had been in the Giants front office for more than a decade before assuming taking the GM job in Carolina, and besides taking the previous guy’s players to the Super Bowl and torching that franchise’s promise to cinders, he reportedly rubbed players and colleagues the wrong way. A blithe and malignant arrogance was the charge, and it scanned as true enough because in pressers Gettleman was dismissive and haughty—he famously bragged that he barely considered trading down from the number two spot in his first draft with the Giants; he absolutely had to have Saquon Barkley, a running back he claimed was “touched by the hand of god”—and also goofy in ways that suggested he had been in powerful positions for so long that nobody had the juice to advise him to maybe not talk like that, that people were laughing at him when he called offensive linemen “hog mollies” and young players “puppies.”

When asked about giving up draft picks in a midseason trade for Leonard Williams, who was in a contract year and could’ve been signed the following the summer for nothing more than money, he responded cooly: “the juice was worth the squeeze.” When reporter Kim Jones pressed him about the lack of progress he had made partway through his tenure, he was condescending and gross: “Rome wasn’t built in a day, dah-ling.” Gettleman foundered in his job, but his personality was tougher to take than his free agent signings and draft day decisions.

Here would be the part, if I thought it would be interesting to anyone who doesn’t already know who Patrick Omameh is, where I would list all of Gettleman’s boneheaded moves. Let’s save ourselves five tedious paragraphs. Take my word for it that most of the players he liked underperformed and some of the ones he passed on went on to play great and every outcome, even when Gettleman put a rare W on the board, was a result of poor process. His work was fundamentally flawed; his assumptions were off. He wanted to stop the run and run the ball. He dismissed analytics as nerd stuff and didn’t understand positional value. He picked Daniel Jones as the team’s successor to Eli more or less because he was floppy-haired and boring and just, you know, looked like a quarterback. (Which is to say: a Republican House staffer.)

For four years, Gettleman was allowed to keep screwing up. He assembled some atrocious rosters over his first two seasons and should have been fired when the team showed nondescript middle manager type Pat Shurmur the door in 2020, but he had been with the franchise for a long time and was personally backed by the Giants’ geriatric rich kid owner John Mara, who hates firing people even more than he likes hiring people he already knows. When Joe Judge was brought aboard following Shurmur’s dismissal, it probably wasn’t Gettleman’s call—Judge, a force of personality if nothing else, floored Mara in his interview; Mara reportedly bragged to his friends that he had signed the next Bill Parcells—but Gettleman was deemed fit to do the new golden boy’s grocery shopping.

Joe Judge, as he revealed over one vaguely promising and one wholly excruciating season, is merely a loquacious gym teacher. He made his players run laps for mistakes in practice and expounded for three or four minutes at a time in front of the press about discipline and fundamentals, and then his teams would go out commit lots of dumb penalties and he would botch his timeout usage and forget how the rules worked, and boy, it was a mess. Judge’s Giants were losers, just like Shurmur’s had been.

It’s hard to say what Judge did for two years other than talk. He didn’t call plays on either side of the ball and the Giants seemed ill-prepared on special teams, or when the game threw them a curveball. Those New York/New Jersey media scene fellas loved him (for a while) but to me he always seemed like a hilariously thin figure, a football coach plucked from the universe of TNT Sunday afternoon presentations: a stern pep talk orbiting a void. In the end, the results—six double-digit losses to cap the season, Judge losing his damn mind in a post-game presser—bore this out.

The Giants granted Gettleman the dignity of a retirement this past Monday, though it’s obvious that he wasn’t welcome to return for a fifth year. On Tuesday evening, some 30 hours after teams with coaches that nearly made the playoffs announced that they were making a change, Mara finally fired Joe Judge too. This is something he clearly didn’t want to do, and if Judge and his Giants hadn’t aggressively melted down toward the season’s end, Mara would have found a sliver of a reason to keep him around. But kicking and screaming, the Giants are starting fresh, or coming as close to it as they have since—this is not an exaggeration—the NFL forced them to hire George Young as GM in 1979. They’re going to do a normal thing that other franchises do all the time, which is bring in a GM who isn’t already a family friend, and let that person pick a head coach they would like to work with, and then give that twosome a few years to see if they can figure it out.

That making this not at all difficult decision, following many years of bad football, was so strenuous speaks to a deep rot within the organization. There are, all over the front office, Mara clansmen and and mediocre Giants lifers who have been sucking up to their bosses since Kerry Collins was under center. It does not seem like a group that’s actually interested in winning so much as cultivating little nodes of power and influence within an extremely parochial corporate culture. It’s possible, though unlikely, that this new general manager will be given the authority to clear out some of this human bramble, and get everybody focused on, like, constructing a competent roster led by coaches who sort of know what they’re doing. This would qualify as grand ambition, for the New York Giants. At the very least, top brass have made their first good call in half a decade. It is nothing more than this, but for a while it seemed impossible: it’s a start.

Colin McGowan is a contributing writer to RealGM.