We have created a year-end team portfolio ranking for the NFL. The exercise is to evaluate every team as if they were a portfolio of assets to determine which is most valuable.

The only considerations are talent, age, cap flexibility and contract situations with the goal being to eventually compete for and win the Super Bowl. An older team already contending is more valued than a younger team with a ton of talent that may not get there, but the younger team with upside is a better bet than an older team that’s currently better but without the upside.

The NFL has a quickly changing landscape, but this creation of a hierarchal ranking gives a look to how we would choose their collective situations at the end of 2016. Last year's rankings are in parenthesis, which you can also read here.

32. New York Jets (18): Darrelle Revis fell off entirely this season while Muhammad Wilkerson and Sheldon Richardson are mid-career defensive linemen who have regressed in 2016. There is no quarterback solution on the roster and only the Cowboys have a worse cap outlook.

31. Los Angeles Rams (15): Aaron Donald remains one of the NFL’s most productive defensive players but the rest of that young defense hasn’t come along as expected. Todd Gurley looked great as a rookie and has been just another guy this season; it’s tough to gauge what’s on him and what’s on the rest of the offense. The Rams owe a first and a third to the Titans for Jared Goff and nobody knows if he’ll even be a starter quality quarterback.

30. San Francisco 49ers (26): There are very few starter quality pieces on this roster with Carlos Hyde and DeForest Buckner perhaps the only young players capable of becoming a Pro Bowl caliber contributor in the future. At least they own their picks, have three extra late round selections this year and plenty of cap space.

29. Buffalo Bills (29): LeSean McCoy has returned to form but he’ll be 29 next season while Marcell Dareus has fallen off and is expensive. There also is no quarterback here and Sammy Watkins continues to struggle to stay healthy.

28. Jacksonville Jaguars (22): The Blake Bortles experiment is nearing its end unless their new coach sees something everyone else is missing. Along with Dante Fowler, Luke Joeckel and Justin Blackmon, Jacksonville has very little to show for their run of top-5 picks though Jalen Ramsey has had an excellent rookie season.

27. Cleveland Browns (31): The Browns probably missed their chance to trade Joe Thomas and Joe Haden but the extra picks coming from the Carson Wentz trade could lead to the franchise building a young core on the fly as we saw the Raiders do in 2014. Danny Shelton and Christian Kirksey are a pair of nice building blocks on defense.

26. New Orleans Saints (27): Drew Brees won’t be around forever and he’s made a lot of mediocre defenses and even receiver corps look good for years.

25. San Diego Chargers (30): Melvin Ingram and Gurley swapped career forecasts in their second season while Joey Bosa has been even better than advertised. If they can get Keenan Allen back healthy next season, the Chargers could make one last run with Philip Rivers.

24. Minnesota Vikings (17): The short-term trade of a first round pick for Sam Bradford ultimately backfired after their good start to 2016 but they’ll likely roll it back with him in 2017 with Teddy Bridgewater’s future uncertain. Adrian Peterson will be gone unless he renegotiates his contract. At least the defense will continue to be good for the foreseeable future with Harrison Smith, Xavier Rhodes, Everson Griffen and Danielle Hunter.

23. Arizona Cardinals (4): David Johnson has been outstanding in his second-year to become a clear top-3 running back in the NFL, which the Cardinals will need as Larry Fitzgerald ages out of his prime and they search for their next solution at quarterback. Patrick Peterson continues to be one of the best cornerbacks in the NFL and they’ll need Tyrann Mathieu to get healthy again.

22. Indianapolis Colts (24): Andrew Luck will be 28 at the start of next season, the same age as Aaron Rodgers was when he won his Super Bowl. There’s so little talent around Luck beyond T.Y. Hilton where getting back to an AFC Championship Game in the near future is unlikely. Luck is very expensive now and possibly overrated though that’s a hard determination to make with what he’s been given to work with. Starting out with such a high level of quarterback play though makes a rebuild a quick proposition.

21. Philadelphia Eagles (12): Carson Wentz has shown the poise and arm to be a top-10 quarterback in the NFL but he still very much remains an unfinished product. Fletcher Cox has justified the new big contract anchoring their defensive line.

20. Chicago Bears (13): Chicago is a bit of a blank slate and will be searching for a quarterback but Leonard Floyd and Jordan Howard have had very good rookie seasons.

19. Cincinnati Bengals (3): A.J. Green and Geno Atkins have a lot of high-end years left and Andy Dalton at least gives you a chance. There is a need still for younger players to produce.

18. Carolina Panthers (1): Cam Newton hasn’t been at his 2015 MVP level this season but he’ll remain one of the better quarterbacks in the NFL indefinitely as will Luke Kuechly at linebacker.

17. Miami Dolphins (32): Jarvis Landry and Jay Ajayi make up a nice young duo at two of the skill positions regardless of what they decide to do with Ryan Tannehill, plus the defense has good depth.

16. Baltimore Ravens (25): C.J. Mosley is continuing the tradition of great Baltimore linebackers and Joe Flacco still has five or six prime seasons left and he’ll have Ronnie Stanley blocking his blind side for the duration.

15. Atlanta Falcons (20): Julio Jones produces whenever he’s healthy and Matt Ryan is consistently above average even if rarely spectacular. Devonta Freeman is similarly credible at running back while Vic Beasley has given Atlanta an elite pass rusher and Keanu Neal has had a tremendous rookie season at safety.

14. Houston Texans (11): The $72 million commitment to Brock Osweiler already appears to be a lost cause but Jadeveon Clowney began to deliver upon his potential this season without J.J. Watt. DeAndre Hopkins is also a top-10 wide receiver who is still just 24 and simply needs a quarterback to get him the ball.

13. Washington (14): Trent Williams, Brandon Scherff, Jordan Reed and Kirk Cousins (assuming he signs long-term) is a nice young foundational core on offense. Josh Norman was an expensive signing but he actually performed well outside of Carolina’s system while Ryan Kerrigan is one of the NFL’s more underrated linebackers.

12. Detroit Lions (16): Matthew Stafford has been better than ever despite losing Calvin Johnson and having a running back by committee approach. The addition of Taylor Decker at left tackle has made a big difference. The defense doesn’t have the star power it did with Ndamukong Suh but Darius Slay and Glover Quin are two underrated players in the league in the secondary.

11. Tampa Bay Buccaneers (19): There are no longer any questions about the combination of Mike Evans and Jameis Winston, plus Gerald McCoy, Lavonte David and Vernon Hargreaves make their defense formidable. On top of that young existing talent, they will lead the NFL in cap space this offseason.

10. Tennessee Titans (23): The Titans all of a sudden had five Pro Bowlers this season while Marcus Mariota definitely belongs in the conversation of the best young quarterbacks. With Jack Conklin and Taylor Lewan at the offensive tackle positions protecting Mariota, the foundation for the Tennessee offense will be very good for a long time. The Titans will add to their young team in the draft with the extra picks coming from the Rams in the Goff trade.

9. Pittsburgh Steelers (10): The trio of Ben Roethlisberger, Antonio Brown and Le’Veon Bell is the best in the game plus they also have Maurkice Pouncey, Marcus Gilbert and David DeCastro on the line still in their twenties. The defense is being remade with Artie Burns emerging as a foundational cornerback.

8. Green Bay Packers (8): Aaron Rodgers is still the best quarterback in the game and his line has been better with David Bakhtiari, Bryan Bulaga and T.J. Lang even as Jordy Nelson and Randall Cobb have been fairly ordinary. Ha Ha Clinton-Dix has emerged as one of the game’s best young safeties and Clay Matthews is a force when healthy. Mike Daniels at defensive tackle is another under-30 difference-maker.

7. Denver Broncos (9): The defense will continue to be dominant for the next few seasons with Von Miller, Chris Harris Jr., Aqib Talib, T.J. Ward and Darian Stewart in their prime. The offense is less certain as Demaryius Thomas and Emmanuel Sanders weren’t quite as electric.

6. New York Giants (18): Odell Beckham Jr. can be both mercurial and inconsistent but nobody singlehandedly makes as many big plays. On the other side of the ball, Landon Collins will receive Defensive Player of the Year consideration in his second season while Eli Apple and Janoris Jenkins are two of the game’s best corners. Olivier Vernon is expensive but has proven to be worth it, as has his fellow free agent signing on the defensive line Damon Harrison.

5. Kansas City Chiefs (6): Eric Berry and Marcus Peters comprise the core of a very good secondary while Justin Houston is still a monster pass rusher when healthy. Dee Ford also had a breakout season at linebacker early on. On offense, Travis Kelce is one of the game’s best tight ends and Tyreek Hill can change the game in a number of different ways.

4. Oakland Raiders (7): The Khalil Mack and Derek Carr picks in 2014 will continue to be the dream of NFL GMs for years to come as perennial Player of the Year candidates. Amari Cooper established himself in the second tier of wide receivers in his second year. Rodney Hudson and Kelechi Osemele are the young standouts on the offensive line while Donald Penn has a few years left at left tackle. Reggie Nelson is a Pro Bowler at safety already while rookie Karl Joseph could be one soon himself.

3. New England Patriots (5): It’s hard to judge the overall talent of the roster because Tom Brady is entirely age defying and Bill Belichick is a genius, but there’s a lot of players on this roster who would thrive in any situation. Rob Gronkowski is a top-3 game changer when healthy and he’s on a good contract while LeGarrette Blount complement each other perfectly for this system at running back. On defense, Dont’a Hightower, Malcolm Butler and Devin McCourty are special players in their twenties.

2. Dallas Cowboys (28): Ezekiel Elliott and Dak Prescott will deservedly receive a ton of attention over the next decade and we’ll always look back at this 2016 with astonishment for what they accomplished as rookies, but the very good and very young line anchored by Tyron Smith, Zack Martin and Travis Frederick should keep that momentum going indefinitely. Dez Bryant is still only 28 and can be a top-10 wide receiver when healthy. The defense doesn’t have the same quality even though Sean Lee has delivered on his early career promise getting through 2015 and 2016 healthy.

1. Seattle Seahawks (2): The depth isn’t quite what it was a few years ago now that everyone is being appropriately paid but the core of Russell Wilson at quarterback along with Richard Sherman, Bobby Wagner, Earl Thomas and K.J. Wright remain firmly in their twenties. Cliff Avril and Michael Bennett are a little older but haven’t dropped off at all. Seattle has even bolstered the offensive line with Justin Britt and Germain Ifedi. 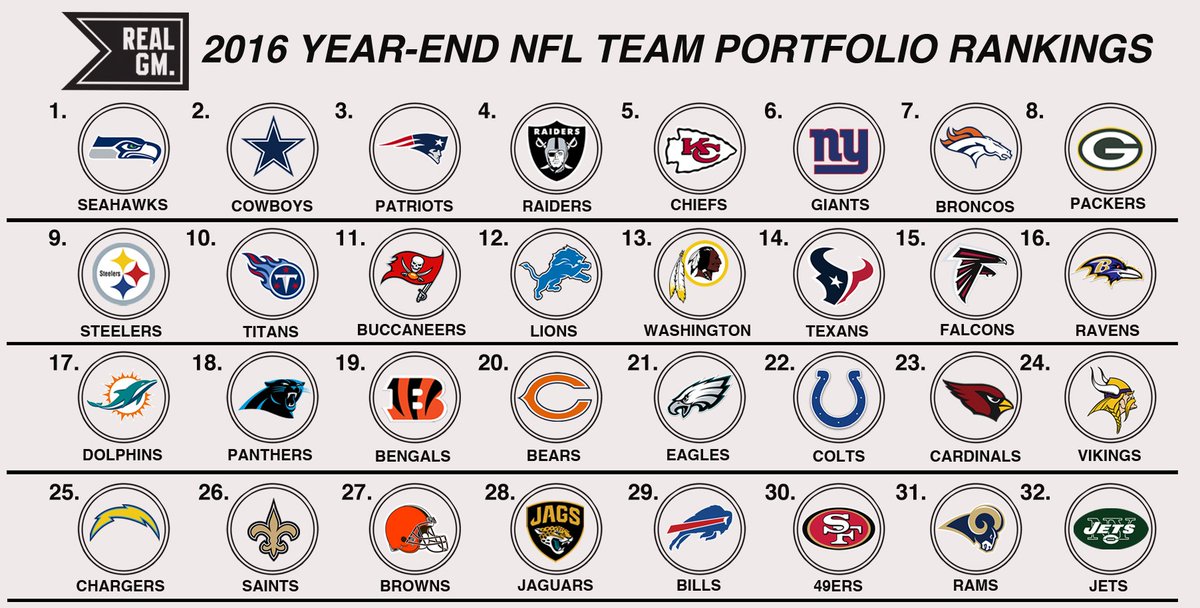