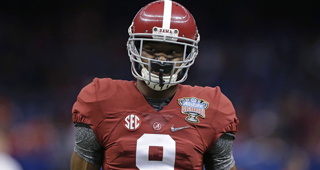 It’s St. Patrick’s Day, just a few weeks before the 2015 NFL Draft. With the draft festivities being in Chicago, one of the best places to celebrate St. Patty’s Day, it makes sense to put out another mock draft.

This one features a couple of trades, as well as the influence of a week of free agency and deals. The picks here are more about approximating the player with a draft slot more than player/team marriages, with a few exceptions. It’s also important to remember that not every fan base winds up happy with how its team drafts. I bounced the trades here off a few different people to make sure I got the compensation correct, though they are my pure concoctions. Remember that--it’s still too early to really project with any accuracy other than the first two picks, which I do think are pretty locked in already.

1. Tampa Bay Buccaneers: Jameis Winston, QB, Florida State. This sure appears to be a done deal. As noted above, this mock is more about matching the player to the draft slot than player to team, but it all comes together here.

2. Tennessee Titans: Leonard Williams, DT, USC. No change here from the last edition either, because there is no reason to believe the Titans have suddenly lost faith in Zach Mettenberger as their QB. Williams would look mighty nice anchoring the defense with the bolstered edge rushers the Titans signed in free agency.

3. Jacksonville Jaguars: Vic Beasley, Edge, Clemson. Beasley is the most explosive--in workout gear--edge rusher in this draft. The Jaguars need playmakers on defense and Beasley has the potential to instigate a lot of positive action for Gus Bradley’s D.

4. Oakland Raiders: Amari Cooper, WR, Alabama. I’ve resisted the groupthink trend of mocking a wideout to Oakland here, in part because I’m not sold the Raiders viewed any wideout that highly. That changed somewhat after Cooper’s fantastic pro day last week, and the reaction to it from those in attendance I’ve spoken to and read. I still think this is very much up in the air but I won’t fight the mob mentality right now.

5. Washington: Dante Fowler, Edge, Florida. Beasley and Fowler switch places from the last incarnation. Either could wind up in either spot as they are the preeminent edge rushing studs in this draft class as perceived by scouts I’ve asked. Fowler is seen as more versatile, able to put his hand in the dirt too. But I would be remiss if I didn’t include this…

In the last 24 hours I spoke with 3 #NFL sources and I was told by everyone that #Redskins will take Marcus Mariota if he gets to 5.

6. *New Orleans Saints (trade with NYJ): Marcus Mariota, QB, Oregon. The Saints make the big move into full rebuild by trading QB Drew Brees and the #13 overall pick to the Jets for this pick and New York’s third-round pick, #70 overall, as well as a conditional 2016 pick. Hey, stranger things have happened…

7. Chicago Bears: Danny Shelton, DT, Washington. Chicago has made some smart free-agent signings, including underrated Pernell McPhee to help shore up the edge rush. Shelton can be the anchor in the middle of the new-look defense, pairing with Ego Ferguson and Will Sutton from last year’s draft to make a strong interior rotation. Shelton is the spearhead and a unique talent, and uniqueness sells in the draft.

8. Atlanta Falcons: Randy Gregory, OLB, Nebraska. I envision the Falcons deploying Gregory in the way Minnesota used Anthony Barr last year, a base SAM backer who moves around the formation as a pass rusher. He is a high risk/reward prospect, and beleaguered GM Thomas Dimitroff needs the home run Gregory could be.

9. New York Giants: Trae Waynes, CB, Michigan State. Probably higher than you’ll see the talented but slightly-built Waynes, but his length and speed are tough to overlook. Consider he’s a significantly better cover man and comparable athlete to last year’s 8th pick, Justin Gilbert. The Giants must reload the defense as much as they need offensive line help.

10. St. Louis Rams: Kevin White, WR, West Virginia. Now armed with a (fairly) legit QB in Nick Foles, GM Les Snead and Head Coach Jeff Fisher go out and get him a viable #1 wideout. Can’t rule out secondary help by any means, and adding the TCU edition of Kevin White in the 4th round would look smart too.

11. Minnesota Vikings: Brandon Scherff, OL, Iowa. Building the offense around Teddy Bridgewater is the imperative. Adding Mike Wallace should (should) help bolster the receiving ranks, and GM Rick Speilman opts to bolster the line in front of Teddy here with the burly Scherff. He can play guard or tackle and the Vikings need one of each on the left side.

12. Cleveland Browns: Devante Parker, WR, Louisville. Because Brian Hartline cannot possibly be a #1 wideout, and Parker is a dynamic outside weapon who can make the acrobatic catch on poorly-thrown balls. I’ve been fed nuggets from two different people that Danny Shelton will not fall past this pick.

13. *New York Jets (trade with NO): Andrus Peat, T, Stanford. Armed with Drew Brees and poised to win right now after moves to acquire Revis, Marshall, Cromartie and Skrine, the Jets opt to reinforce the protection in front of Brees. They are gambling here in my little hypothetical world Brees has two very good years left in him, in which time Geno Smith improves by osmosis.

14. Miami Dolphins: Shaq Thompson, LB, Washington. He’s a Swiss Army knife for a defense where he could thrive running free behind prized FA Ndamukong Suh. He can play WLB or MLB as well as a heavy safety depending on the offensive set, and his athleticism is fantastic. Trading Dannell Ellerbe (part of the Kenny Stills deal) clears roster space for Thompson.

15. *Philadelphia Eagles (trade with SF): Arik Armstead, DL, Oregon. Chip Kelly continues to transform his Eagles into Eugene East by trading the 20th overall pick and guard Evan Mathis to the 49ers, also getting back San Francisco’s 4th and 6th round picks. Armstead is full of length and potential as an attacking DE.

16. Houston Texans: Ronald Darby, CB, Florida State. Too many people I trust keep insisting Darby is going to be a first-round pick, and he fits the Texans need for a speedy outside CB who can turn and run with any wideout. I still think Todd Gurley makes sense here despite the rage that selection brought from Houston fans in the last mock.

17. San Diego Chargers: La’el Collins, OL, LSU. Is he a left guard or a left tackle? San Diego continues to rebuild the offensive line with the versatile Collins, a thumping presence no matter where he lines up. I resisted the urge to give them Todd Gurley here.

18. Kansas City Chiefs: Eddie Goldman, DT, Florida State. He has a questionable motor but unquestionable run stuffing skills and positional versatility along the front line. Goldman helps solidify a front which has Dontari Poe and not much else. I long pondered a corner here.

19. Cleveland Browns (from BUF): Malcom Brown, DT, Texas. Brown to the Browns…too convenient? Perhaps, but he brings pass rush from between the tackles and high-end potential. I would not be surprised if this pick is dealt as part of a package to move up, but in this scenario it just didn’t materialize.

20. *San Francisco 49ers (trade with SF): Eric Rowe, CB, Utah. One of this draft’s underrated gems and my personal draft man crush in 2015, Rowe brings length, speed and tackling to a 49ers defense suddenly undergoing a major rebuild. The converted safety is going to go a lot higher than most people think.

21. Cincinnati Bengals: T.J. Clemmings, T, Pittsburgh. The Bengals have no glaring needs other than developmental depth at several spots to eventually succeed aging starters. Clemmings could wind up being the best tackle in this draft, but he needs seasoning and technical refinement. He can get that while tutoring under Andrew Whitworth.

22. Pittsburgh Steelers: Kevin Johnson, CB, Wake Forest. If you had to bet on which selection in this entire mock beyond the first five picks is most likely to come true, this is probably the one to put the money down on. Johnson is a great cover man but just as importantly he plays with the Steelers mindset.

23. Detroit Lions: Jalen Collins, CB, LSU. My Lions fan brethren are not going to like this pick, but Collins has an eerily similar draft profile to Darius Slay--long, extremely fast and twitchy athletes, not quite ready for primetime right away but with long-range potential oozing out of the pads.

24. Arizona Cardinals: Shane Ray, Edge, Missouri. An unexpected fall by the pass-rushing specialist benefits the Cardinals, who can use Ray’s lightning burst off the edge. I toyed with Maxx Williams here but I think they would select Ray over him.

25. Carolina Panthers: D.J. Humphries, T, Florida. Thanks to his positive weight gain leading from the season into the Combine, Humphries is one of the draft’s biggest movers. He moves quite well on the field too, and can start right away for the OL-starved Panthers.

26. *Washington (trade with Baltimore): Landon Collins, S, Alabama. Washington tries to sate its chronic thirst for safety help by dealing its second-round pick this year and next year to Baltimore in order to select Collins.

27. Dallas Cowboys: Todd Gurley, RB, Georgia. Because Darren McFadden is not a full-time RB and Jerry knows it, and he won’t be able to resist the highest-end RB in the last four drafts falling into his lap here.

28. Denver Broncos: Bud Dupree, Edge, Kentucky. This will be lower than you see Dupree in most mocks, but he strikes me as someone the NFL is not going to love as much as the fans or draftniks. The Broncos take the chance on his impressive physical ability and outstanding power for the position.

29. Indianapolis Colts: Dorial Green-Beckham, WR, Missouri. The risk is extreme but the payoff of providing Andrew Luck with a player who could be an All-Pro wideout is too tantalizing for GM Ryan Grigson, who is no stranger to seemingly strange decisions. There are always stunners in every draft.

30. Green Bay Packers: Stephone Anthony, ILB, Clemson. The Packers luck out and get a talent perfectly suited to fill their biggest need. Anthony is incredibly lithe and instinctive, just what the Packers need in the middle of their defense.

31. New Orleans Saints (from SEA): Maxx Williams, TE, Minnesota. Replacing Jimmy Graham at tight end is not possible, but the Saints can land the best TE in this draft by a country mile with the pick acquired in dealing Graham to Seattle. Williams can immediately be an above-average receiver and learn to grow with the young QB.